Avoca - Behind the Scene

“Avoca” was taken in Pierre Part, Louisiana – a Caribbean-esque bayou town. I found this houseboat in the Avoca Canal, but the name is also a nod to the avocado green of the houseboat’s exterior. 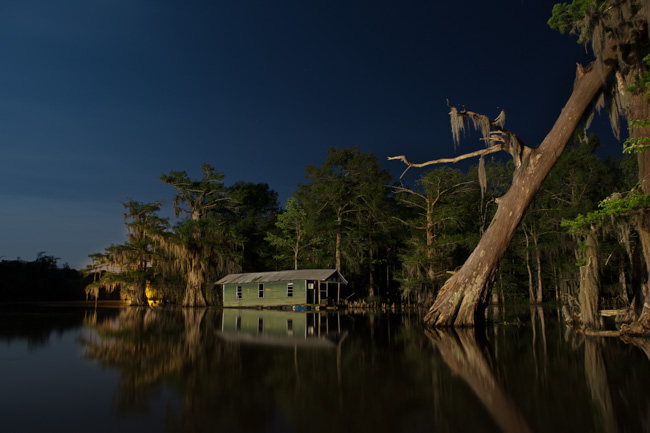 Many of my photographs pose questions about how people belong or don’t belong alongside nature. I question how our civilized selves function with our animal or natural selves. I ponder how we take care of the land, and how the land takes care of us. In this photograph, there is a feeling of harmony between the manmade and the natural.

When I first photographed the scene, the night was dotted with clouds. The colors were limited to the light green of the boat, the grey of the sky, and the dark green foliage. Unsurprisingly, the resulting photograph was drab. So, I went back and photographed again on a clear, moonlit night. In this second attempt, the blue of the sky plays off the greens of the house and tees to create a more balanced, painterly scene.

I was working with my assistant, Matt, and we mounted the camera in the water, which can take an hour to construct and position in the precise spot. The French photographer Atget once said, “The secret of a great photograph is in knowing where to stand.” But when you photograph in water, you can’t stand anywhere; the entire composition depends on the initial placement of the camera. The water can be up to 30 feet deep, and we worked with 90 feet of aluminum pipe sections to create a custom tripod. The pipes sunk through the swamp to be buried in the soft soil beneath the water and provide an above-water platform for my camera. It’s an unwieldy process, and it’s critical to place the camera correctly. One mistake in placement can take an hour to correct. For “Avoca,” I didn’t want the lines of the trees to interfere with the lines of the house. I wanted the cypress limb on the right to clear the tops of the trees, to reveal an expressive, outstretched arm dripping with Spanish moss.

On this shoot, we pulled a kayak behind my flatboat, which is like towing a skier. It slowed things down and made me look ridiculous, but it allowed me to work the camera angle from the kayak while Matt controlled the light position from the flatboat. After we mounted the camera to the tripod, I climbed into the kayak. First, I directed Matt to light the tree from the right, and then to light the houseboat from beyond the left side of the frame. Matt turned his running lights off and drove through the scene to back-light the distant cypress tree with high-pressure sodium, which added a splash of gold to the image.

I love the details: the hanging window screen; the patch of cypress knees off the front porch; the reflection on the front window, which makes it appear lit from within; the blue 55-gallon pontoon drums supporting the structure. The image has an idyllic quality. I want to live there. The house feels like it belongs to the landscape, with a rusting tin roof and the green sideboards and the lean of the tree on the right guiding your eye to the floating home. If you removed the house, you’d still have a beautiful landscape. But the house fits.