Gouffre - Behind the Scene

During the winter of 2016, the Mississippi River reached flood stage, and the Bonne Carre spillway was opened to prevent flooding in New Orleans. Levees were overtopped throughout the Mississippi River Valley. I heard about an old town North of Natchez prone to flood waters. Rumor was that the town, filled with historic structures, was inundated with the high water. I had to see it for myself. 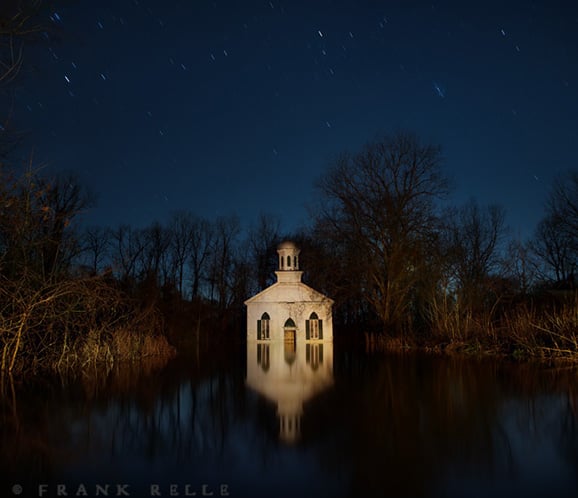 I spent some time looking at maps to locate the best access road. I don’t typically shoot during the winter because my hands don’t agree with freezing water. But I knew the flood waters would recede before the warm weather arrived, so my friend Matt and I got our gear together. The haul included a new raft for my generator, and a pair of chest waders for Matt.

After a half hour on dirt roads, we found the Civil War-era town that locals later told us was once set to be the capital of Mississippi. I didn’t bring my boat, because I knew that there was no boat launch. I put my generator on the new raft, and we donned chest waders to explore the submerged town by foot, oftentimes having to tiptoe to keep our waders above the water line. The town was abandoned. We saw no one, but there were a few lots where people had built private levees around their homes.

After a few hours exploring by foot through the floodwaters, it got so cold that the tops of our waders froze, and Matt decided to head back to New Orleans. I stayed. I had to make the right photograph of this church in the wild flood waters. I waded inside the church, the pews were tied together vertically on the altar, and the church was full of water. I climbed up into the choir loft and made a picture from inside. It was after midnight, and I waded out of the water to warm up, leaving my generator floating in the church. When I went back in, the generator was gone. I panicked, frantically searching the area with my flashlight. The raft had drifted out the church and down a path into the brush; I had to retrieve it before losing my source of electricity.

I tried several different ways to light this scene: side lighting, back lighting, and interior lighting. There was a full moon that provided some light for the roof and sky. As my exhaustion set in, I walked further away from the church, debating getting out of the water. The moon had set and the trees on the horizon were silhouetted with a cool lunar blue. The distant view gave enough space for the church to be both iconic and consumed. This was the shot; I mounted the lights and illuminated the church from a distance, angling the lights from left and right towards the church. The lights were on stands in the water with the electrical cords draped between them and the rafted generator, a testament to the cooperative power of southern flood waters when paired with portable electric powered creative endeavors.

The photograph is titled “Gouffre,” after the town. The town was named “La Petite Gouffre,” which means “the little gulf.”