Dutch Magazine Story - "In the Swamps of New Orleans"

"In the 'swamps' of Louisiana, photographer Frank Relle consciously seeks out danger. 'If you push your limits a little, your mind will get excited and you will be able to do better work.' 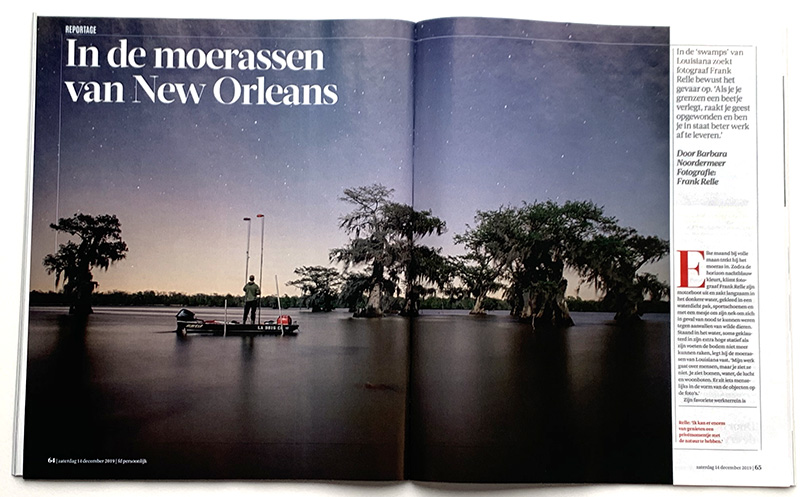 Frank Relle studied cognitive science and philosophy in New Orleans before deciding to make photographs, and in 2004, he released his first series. In the beginning, he photographed the houses of New Orleans, then made his way into the parks and natural settings of the city. Today he photographs the swamps of Louisiana. Among his collectors are Brad Pitt and Ellen Degeneres.

Now, every month when the full moon is approaching, he heads to the swamp. As soon as the horizon turns dark blue, Relle climbs out of his flatboat and slowly sinks into the dark water, wearing a waterproof suit, sneakers and a knife around his neck in case he must defend against attacks from wild animals in an emergency. Standing in the water, sometimes swimming to his thirty-foot tripod when his feet can no longer touch the bottom, he records the swamps of Louisiana. "My work is about people, but you don't see them. You see trees, water, the sky and houseboats. There is something human in the form of the objects in the photos."

His favorite field to work in is Lake Fausse Pointe, a three-hour drive west from the city of New Orleans. "I feel a strong connection with this place, although it is difficult to feel comfortable in the swamp," says Relle. Alligators, eagles, mosquitoes and snakes live there. "Because of the danger, the experience is more intense. If you push your limits a little, your mind will get excited and you will be able to do better work." He uses the hours during the day to explore the area. "I look around, call it treasure hunting. I mark it in an app on my phone, in my treasure map."

New Orleans is the city where Frank Relle grew up, and now lives and works, after a few travels. The city, located in the deep south of the United States, is surrounded by swamps on the left and right, and abuts the Gulf of Mexico. Water binds the area--it is a natural friend and foe. "New Orleans has clear parallels with the Netherlands," says Relle. "The city is underwater and chooses to stay there, even though it sinks and collapses into the streets." 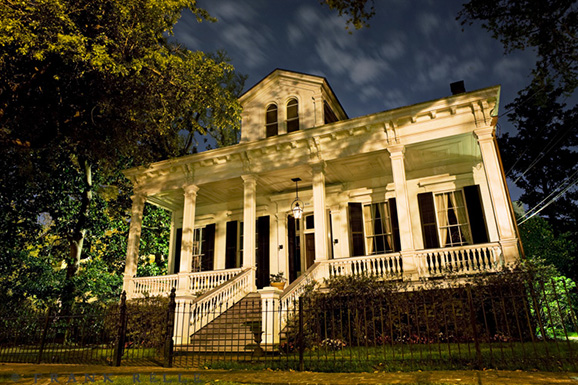 "I stalk places," he says when we look at his work in his gallery. "This house for example." He holds up a picture of a classic white house in the city with pillars and porch, a photo from the early days of his career. "I went there very often. It took a year before the circumstances were good for me to take this photo. " 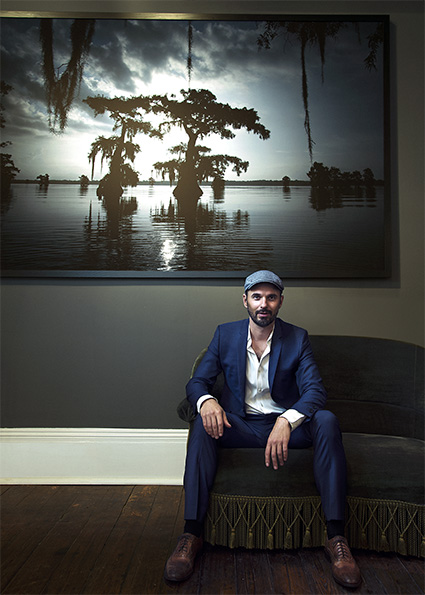 Frank Relle in his gallery in New Orleans.

When the setting sun draws orange-pink stripes in the sky, Frank, his assistant Alex and I head out into Lake Fausse Pointe on the way to one of those treasures. Two alligators threaten to raise their heads. "Are you going into the water like that?" Relle asks, pointing at a waterproof suit with boots. "This is for you." Winding rivers lead to a large lake. There on the other side, a kilometer away, he has a tree in mind that he wants to photograph. Alex, at the helm, opens the gas. In the distance, birds fly up, scattering at the hum of our engine.

"The chance of danger makes the experience more intense."

The moon casts its light on the lake. The landscape around us is one of spooky beauty. The scenes that Relle scouted during the day look different in the dark. "During the day the light is bright, but in the evening shadows fall over the landscape. Then, for example, it suddenly appears as if a tree has limbs." In 2017, he found one with some particularly creepy qualities. "It seems to have a face, arms that stretch out, and it's like it's walking. Behind it is a row of trees, making them appear to be marching." The image is reminiscent of a swamp monster. "It was terribly complicated to make, because the water was very deep. To capture the human-like expression of the trees, you have to be at the right vantage point. But the bottom was uneven and therefore the tripod with my camera always fell over. I spent hours in the water that night to get the composition perfect." 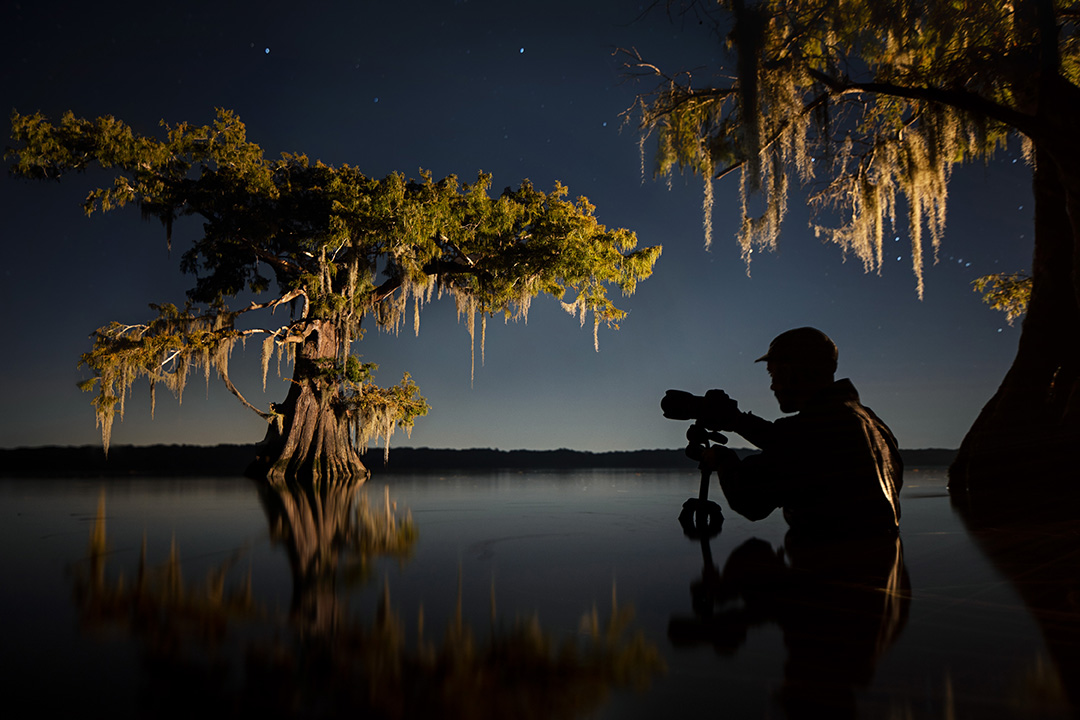 Relle spends hours in the water during a photo session.

The circumstances are ideal tonight. "See how the water here is smooth as a mirror?" Relle measures the depth with a stand. When dusk has fallen, we climb out of the boat into the warm water between the cypress trees. I feel the bottom at my feet, but sink into mud several centimeters deep, as if thick mucus tentacles were winding around my ankles.

We plow forward. The natural resistance of the water, the viscous sludge and the heavy suit make walking a real workout. My legs get caught in a bunch of branches and I almost fall.

"To get the perfect photo, you always go one step further," says Relle. "In the beginning, I tried to take pictures from the boat. Because I work at night and use a slow shutter speed, it turned out to be difficult to get the photo exactly as I wanted on a wobbling boat. Then I would have spent days in the swamp and would not be satisfied with the result at home. That first time from the water yielded a photo like I had never taken before."

Alex has launched a red canoe from the boat and gives it a push in our direction. The equipment is on top of that. Then he sails on to set up the lighting from a distance. While Frank sets up his camera to capture a row of three cypress trees, I cling to the canoe. The water now reaches breast height. On command, Alex turns on the lamps, revealing the contours of the dramatic landscape before us. 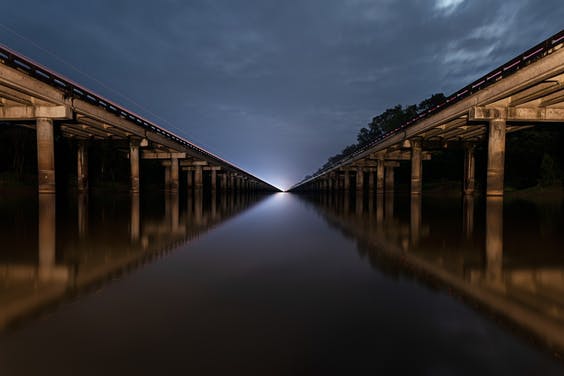 "To take the perfect picture, you always go one step further."

Straight To The Bottom

Frank takes his photos. Dozens of mosquitoes are swarming around us. They sting my neck, hands and elbows. Their buzzing sounds like racing cars in my ears. The air is thick and stuffy. The waterproof suit sticks with sweat. And there, just five meters away, an alligator glides past. His convex eyes glow in the light of the lamp.

"I can really enjoy it when I get the feeling of having a private moment with nature," says Relle. "When you stay in the swamp for a week, you sleep outside and you have no modern comfort. It is absurd what we do with our lives today; sort emails, count the number of likes when you post a photo on social media. But when you return to the simplicity of air, trees, water, food, fire and sleep, you feel challenged."

Back on the boat we put on life jackets. "Because of the dark, we don't see all the obstacles in the water," Relle explains as we return. "People always talk about the danger of alligators. But if we were to hit something, you would fall into the water in your heavy suit and sink directly to the bottom. Now the dangerous work really begins."