Pressler - Behind the Scene

Early in my career a seasoned photographer offered the following advice, ‘If you’re going to speak visually, use visual language. Don’t use written language to speak visually.’ I took his words to heart not only avoiding photographing subjects like the word ‘bar’ in front of bar but also steering clear of visual symbols used with such frequency they have a predefined meaning. 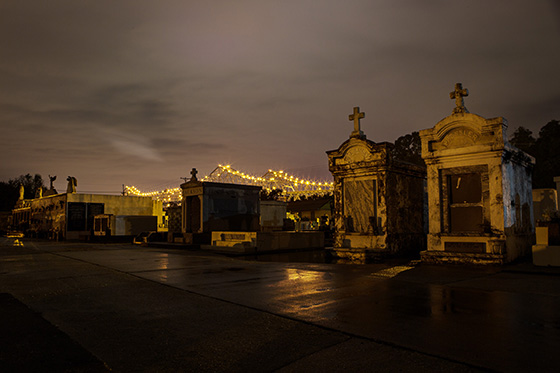 As a native New Orleanian I am acutely aware of the imagery deployed to represent the city. New Orleans is often visually communicated with images of above ground cemeteries and also with the Crescent City Connection stretching high across the Mississippi River. When I began taking pictures I purposefully avoided those symbols. I thought ‘I’m not photographing the cemeteries. I’m not going to photograph the bridge’ almost like a poet who thinks ‘ I’m not going to write a love poem because I’m going to take my work seriously.’ But ultimately the love poem is an important poem for the poet to write.

After working for over a decade in New Orleans, I’ve started to relax some of my early rules and allow myself to be excited by some of the more readily identified views of my hometown. The cemeteries and the bridge are iconic parts of the city and help to visually distinguish New Orleans from other places.

While this picture breaks some of my photographic practices, the recent rain, the moving sky and the way the bridge is growing out of the tops of the mausoleums and the challenge of making my own image out of a well documented subject made it worth exploring.